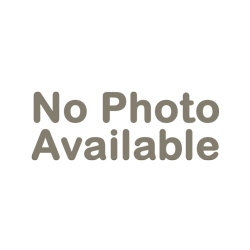 Dallas is pictured here with Kathy and judge Terry Kenney at the 2003 AKC National Specialty where she completed her Herding Excellent title with three consecutive "B" course placements at the specialty. She also won a beautiful Silver Belt Buckle for the 3rd time for "High Scoring Champion" on the B Course.

Dallas has numerous titles on sheep and ducks from AHBA and ASCA, but mostly competes at the Open level of USBCHA (border collie) Herding Trials. Dallas was one of 82 dogs in a 13 state region who qualified for competing in the Midwest Regional Sheepdog Championship in Kansas in November, 2003. She made it into the semi-finals, and finished 12th overall. This was quite an accomplishment, and she did a wonderful job.

Dallas is a superb athlete with an impeccable work ethic and a wonderful temperament and personality. I am blessed to have her in my life - she has taught me so much, and continues to do so. She helps me daily with my work, and is a natural spiritual healer and teacher who helps many of my students and clients.

I thank Pam and Shirley for bringing such a wonderful companion and friend into my life! 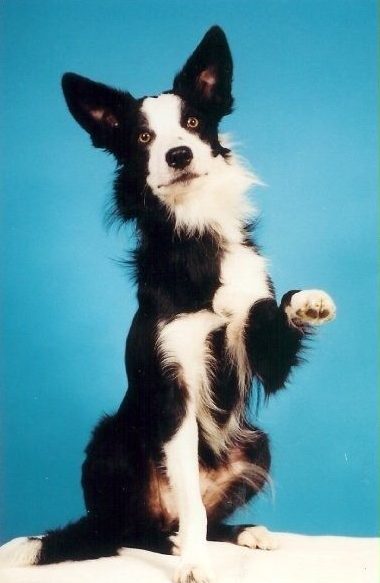 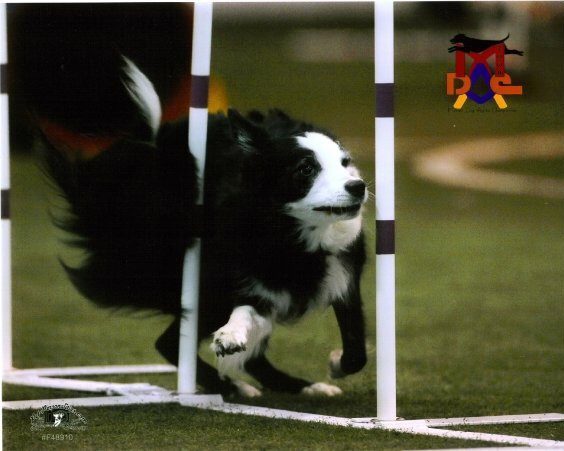 Born in 5/19/01, today, Dera is an 11 year old Border Collie, who has not only been a partner but a teacher over her illustrious career, proving there are more things under the sun than can be counted that one person can learn from a dog.

Currently, she has earned over 58 titles across four agility venues, namely, CPE, UKC, NADAC and AKC In 2006, Dera performed at the Onarga, IL 4th of July Festival and at the St. Peter's Lutheran Church of Crescent City for Prairieview Nursing Home.

Dera has performed tricks and agility demonstrations for charities including the March of Dimes in 2005 at the Empress Casino in Joliet as well as the Chicago Museum of Contemporary Art. In 2005, Dera attended the CPE National Agility Event in Michigan and the NADAC Championships held in St. Louis In 2004, Dera was also the Grand Marshall for the Village of Mokena Pet Parade held in downtown Mokena, IL.

In 2003, she also appeared as a contestant on Animal Planet's tv show "Pet Star". 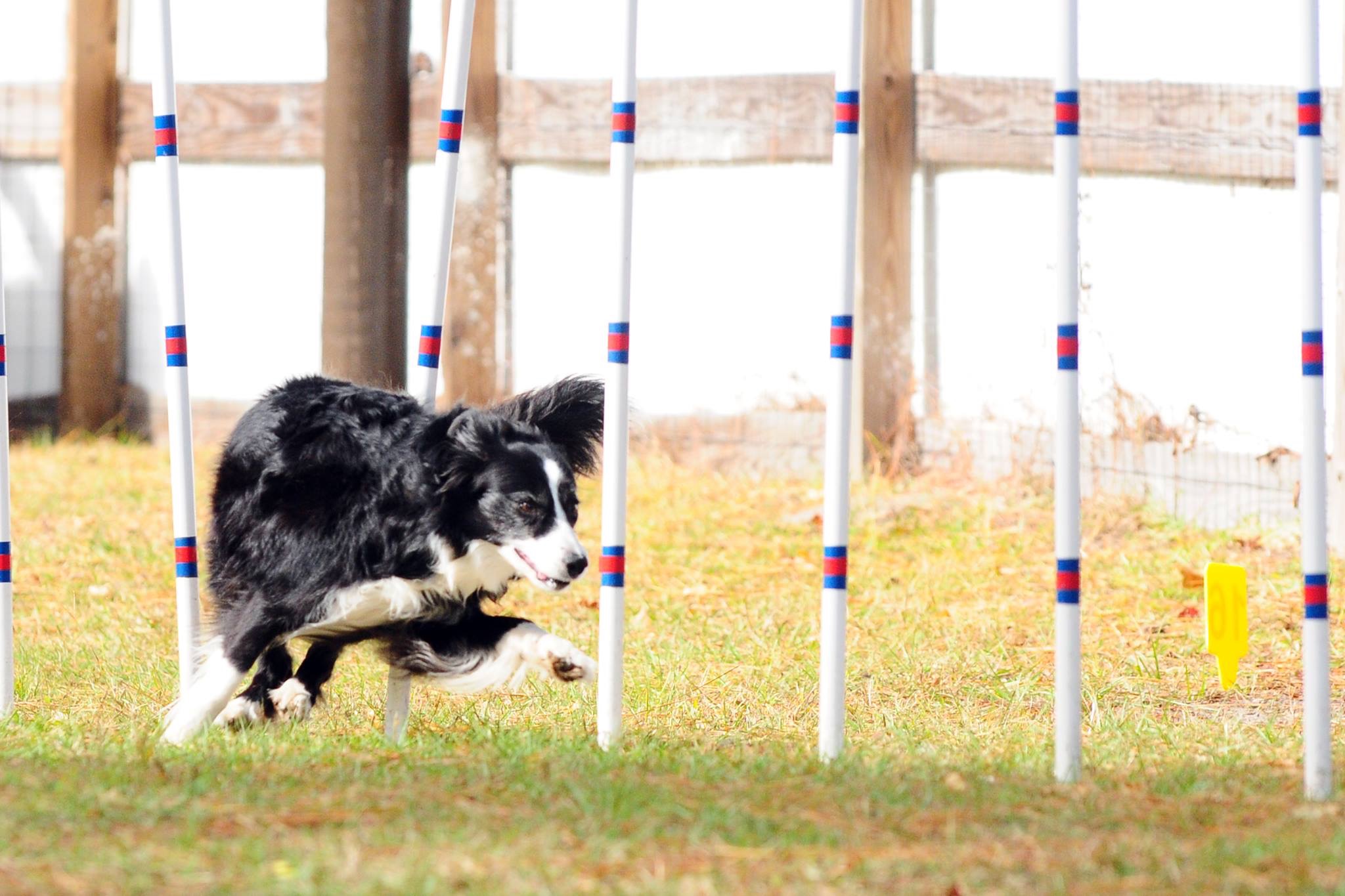 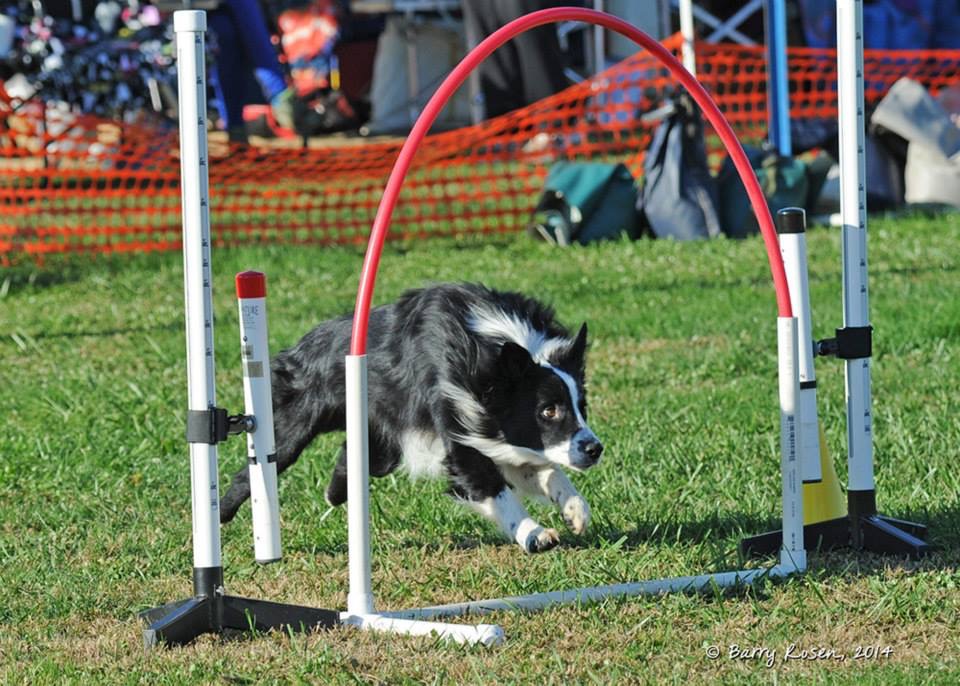 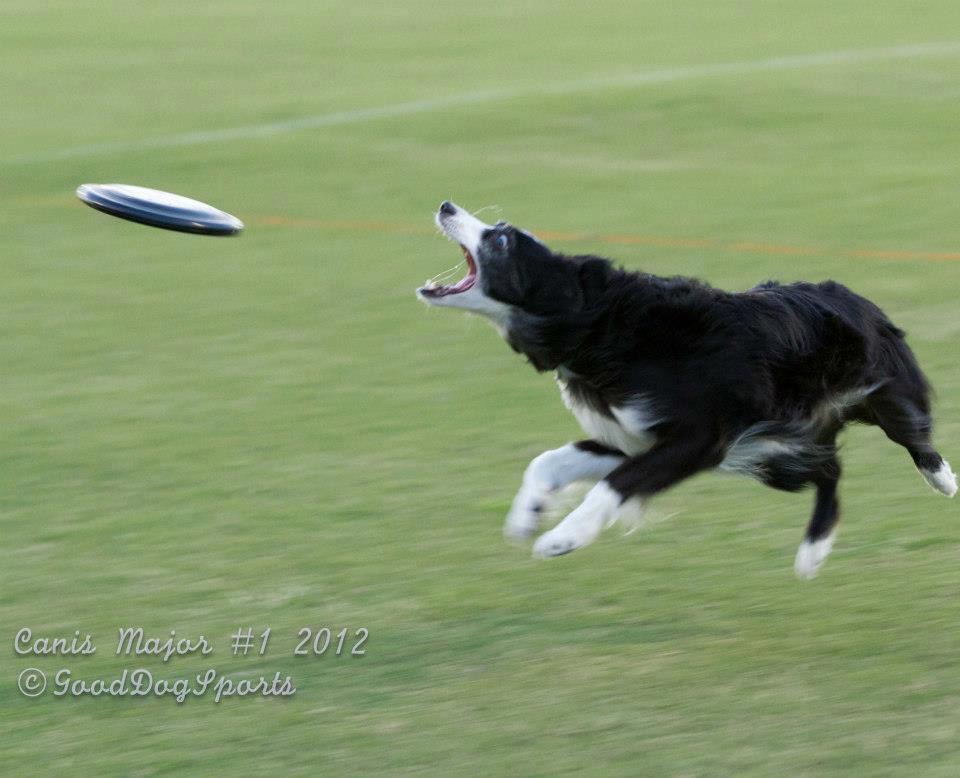 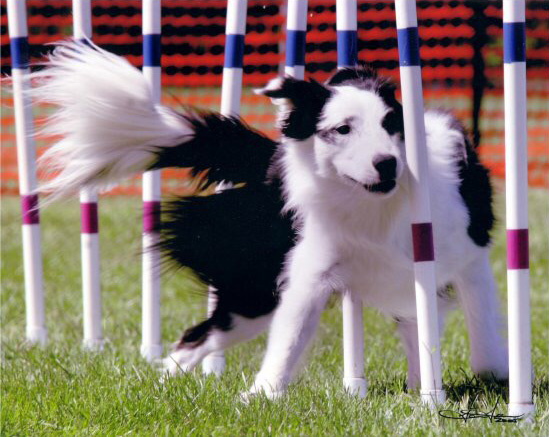 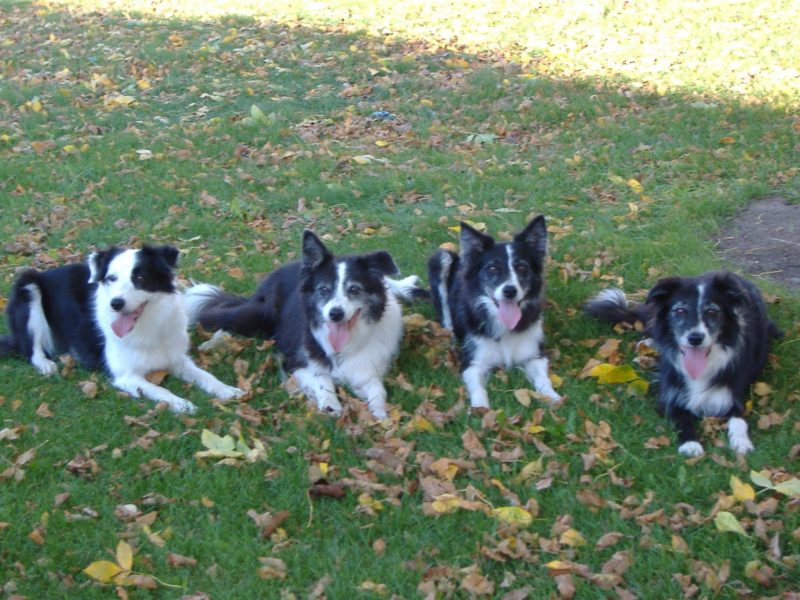 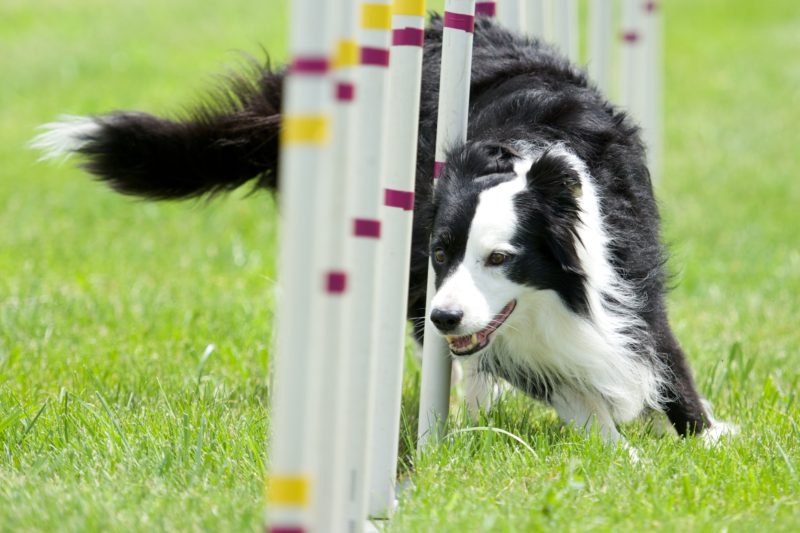 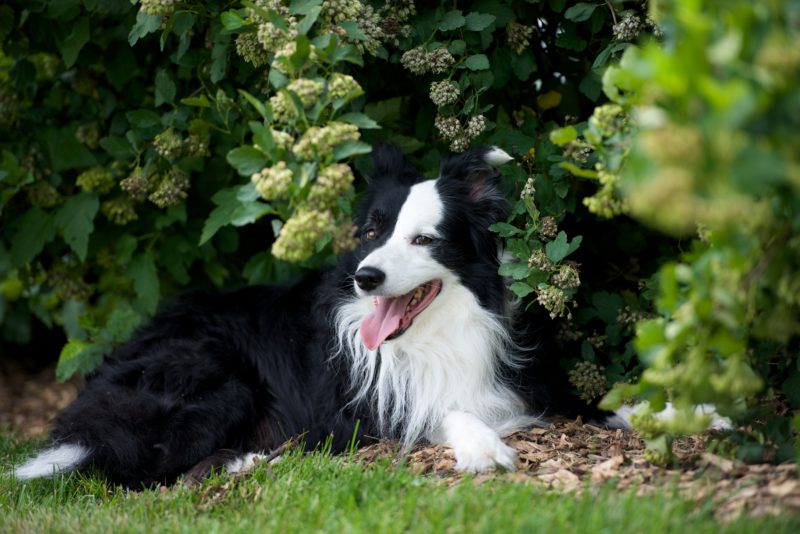 Meet Flipside. Our second youngest dog - and another up and comer in performance sports.

At just over 3 years of age, Flipside can only be described as having the personality of the young people you see pro skateboarding or competing in motor cross sports. Games at high speed are Flipside's favorite. He has a 'no fear' mentality and believes firmly he can leap tall buildings in a single bound. Flipside is as unique as his markings. Commonly referred to as a 'split face',

Flip always finds a unique way of doing things in Border Collie style and creativity. In addition to his developing talent in the agility ring, one of Flipside's greatest attributes at home is his 'self appointment' as our Papillon's best buddy. The two are amazingly bonded and for all of Flip's drive and speed and physical ability, nothing is more endearing than seeing him restrain all of that power to play with a delicately boned, small dog with all the gentleness of a big brother watching over the baby. Case in point, you can see Flip as he played "Life Guard" over our puppy pool when our Papillon decided to take his first adventure into water. Flip stood over and uncharacteristically just 'watched' the pup in the water. Please know, you typically have to 'beg' Flip to get out of 'his' pool - he loves to spend hours just splashing in the water regardless of the weather and why he is our first 'Dock Diving' Border Collie - you can see Flip in competition off a dock below.

In agility, Flip is learning to now balance his speed with maturity and grace versus pummeling a course with speed-speed-speed. This is proving to be a challenging lesson for this fine youngster - but one he's learning well. Flip wants to do whatever you ask him to do and wants to do at such high speeds - it's sometimes difficult to maintain composure. Skill comes with age, experience and practice. Patience may not yet be a strong suit for Flipside, like any youngster on two legs, you can imagine how he sometimes disagrees with taking your time to do things when you can go, go, go, go! Of all the games Flipside loves to play - nothing gears up this uniquely modern Border Collie much more than a fairly recent sport called 'Dock Diving'. Traditionally a 'hunting breed' sport, Dock Diving requires a dog to leap at a distance from a dock into water to retrieve and article. Below are some shots from Flipside's first adventure into the sport and why we now have nicknamed him, "Big Air Flip".

Flip at 6 months old, could he have been cuter? But this is Flip's typical expression even today. The face that says, "What? What are we doing? Something fun right? Cool."

Jazz · Blitzen's All Jazzed Up 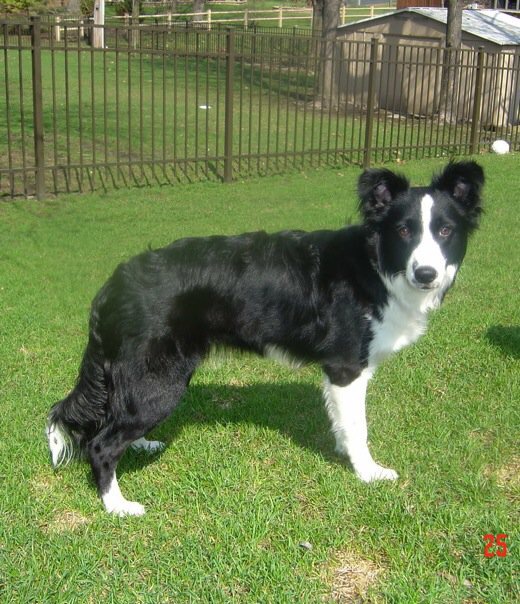 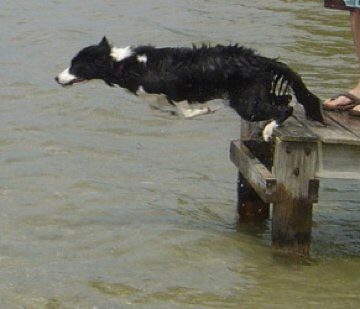 Jazz...where do I begin?? Ever since I can remember, I have always wanted a Border Collie. I always envisioned my future dog being the most incredible dog imaginable: intelligent, driven, and beautiful. Jazz exceeded even my wildest dreams in every possible way. She has set the standard for every dog after her, and they will all have a lot to live up to. Jazz proved she was special from a very young age when she passed the CGC at the tender age of four months. She then proceeded to earn her first rally titles at eight months of age, and has continued to amaze me. I've never met a dog more in love with life and everything in it than Jazzy. She's never met a stranger, and everything I ask her to do she responds to with style and enthusiasm. She loves agility, and our biggest problem is that I need to learn how to handle such a quick dog! She truly lives up to her name, Blitzen's All Jazzed Up, as she is a ball of energy, but so responsive that she keeps herself together and works with me. Nothing is a chore for her; rally, agility, obedience, swimming, walks; she has fun with everything.

Pam, I will forever be indebted to you for having allowed such an wonderful dog to come into my life. She is so amazing, and makes every day an adventure. Even my parents, who are not "dog people," recognize how incredible she is. As my first show dog, she has had to learn along with me, but thanks to Pam's wonderful teaching skills, she's still done great. THANK YOU SO MUCH!!!! 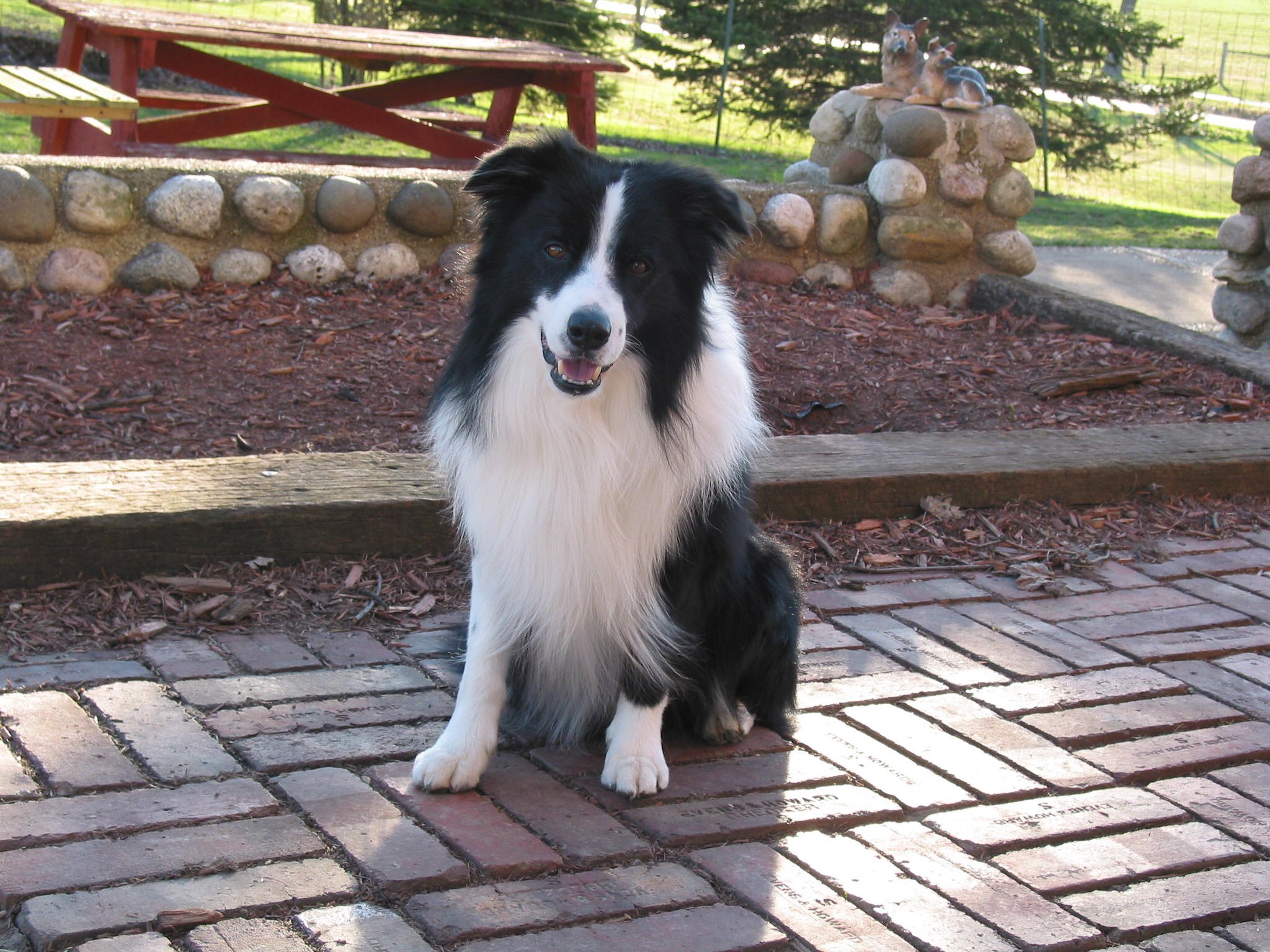 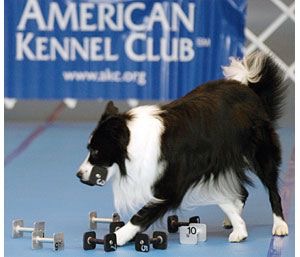 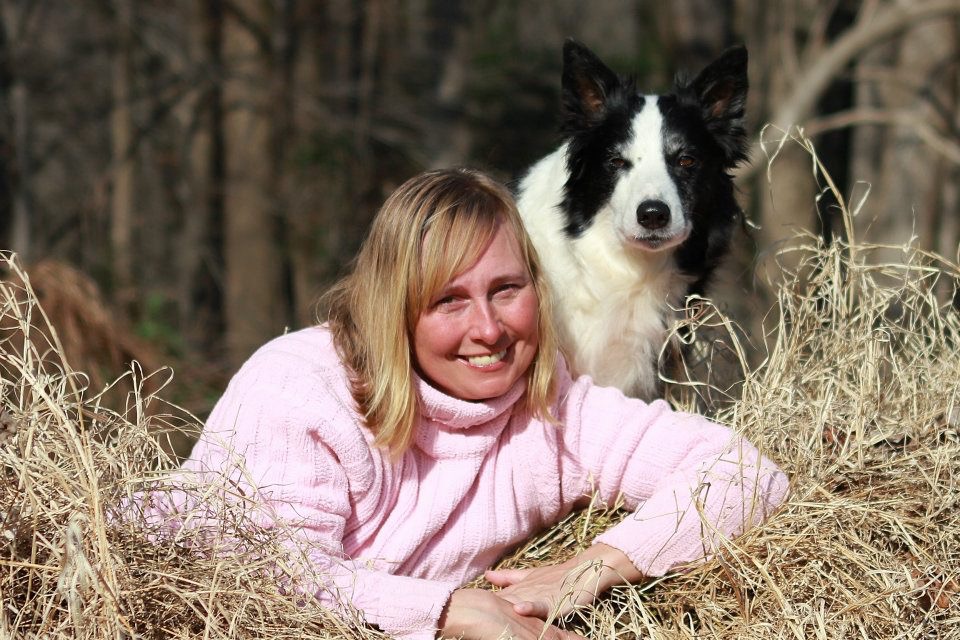 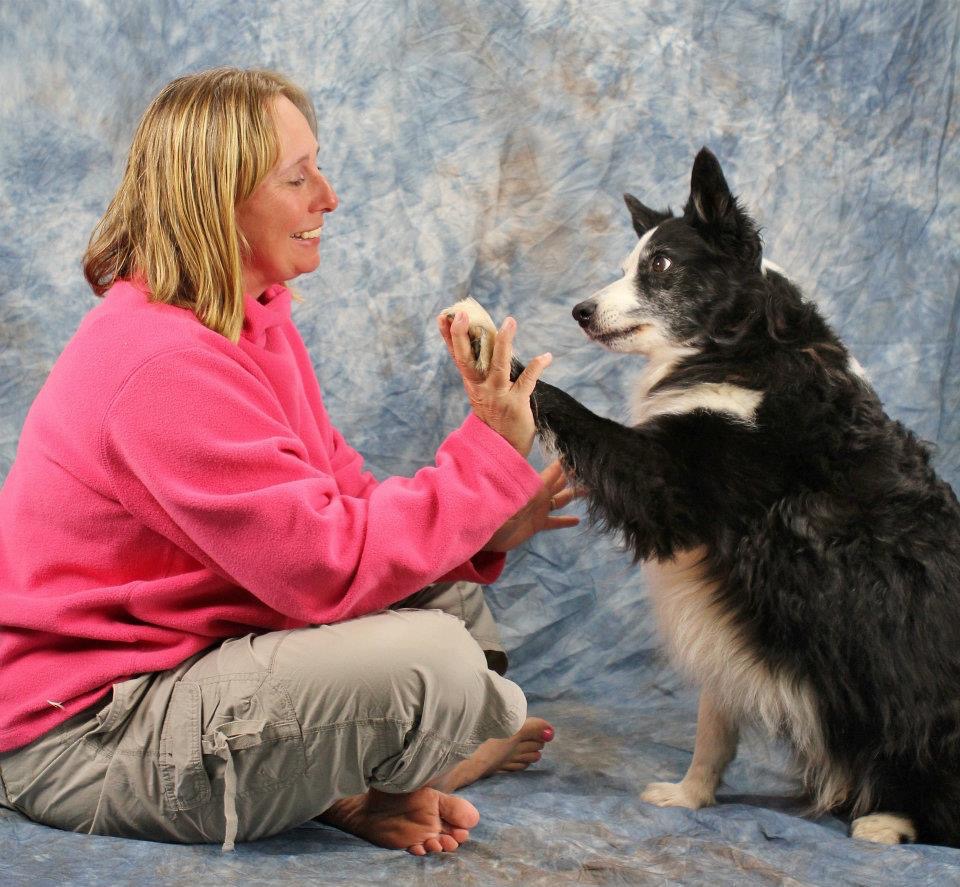 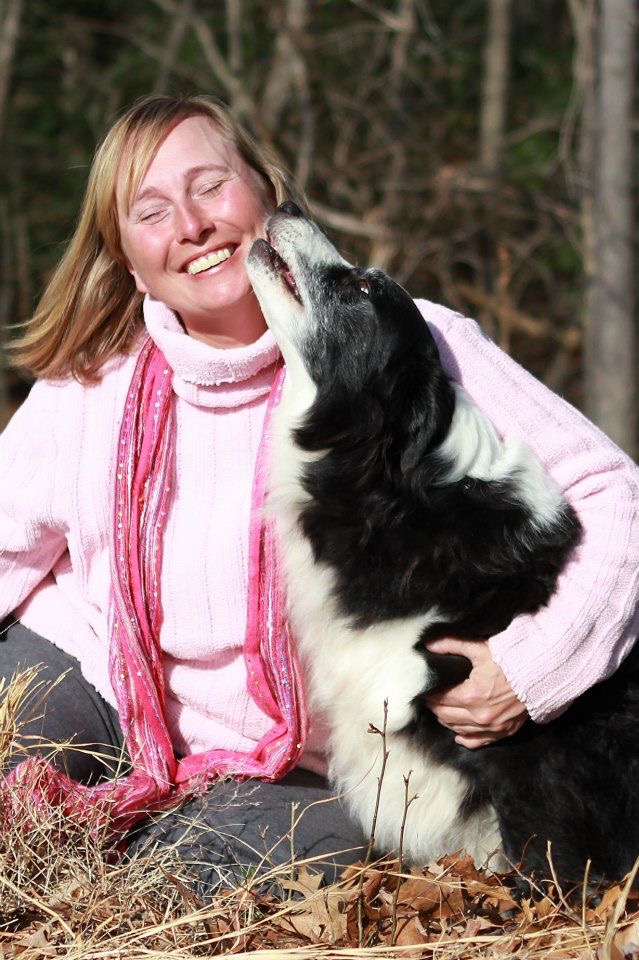 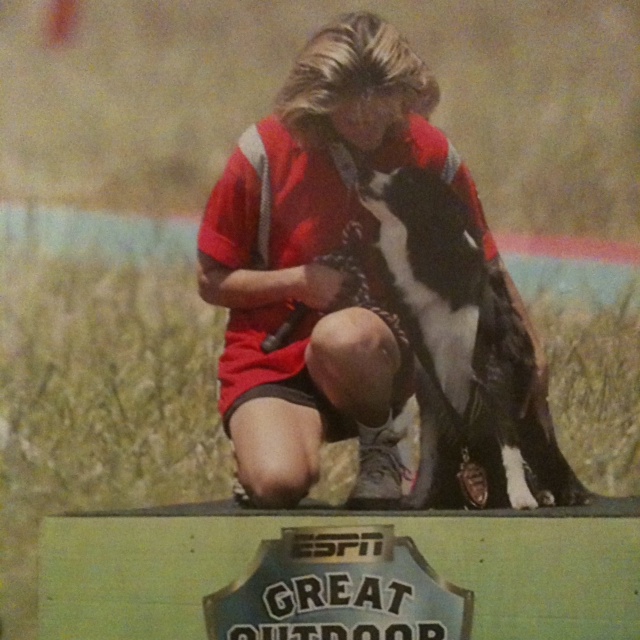 Also, Major Pointed in the Breed Ring and getting ready to go into the Obedience ring this Feb. 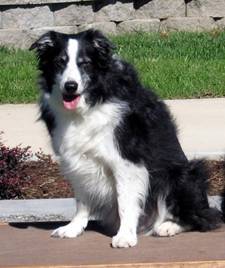 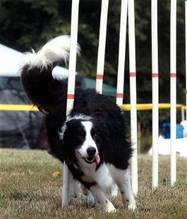 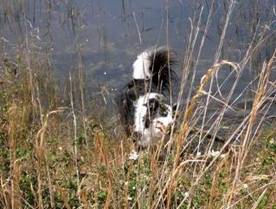 I fell in love with Skye the first time I saw him, at age 4 weeks. That never changed. Skye was my gentleman – rock stable. He was my companion, my best friend, a source of courage to continue on in spite of adversity. He was responsible for major changes in my life. Without Skye I wouldn’t have met so many people I now consider friends, and I would have been much the poorer for it. Skye was my first agility dog – now I own a building full of agility equipment. Skye was my first herding dog – now I have a barn full of sheep. He was always willing to work at anything I asked. He did a little obedience, a lot of agility – but his first love was sheep. At six months of age he first saw sheep, dashed out, gathered them together and held them to the fence. He would find sheep wherever they were hidden, no matter how far away, and bring them in fast and furiously. He never quite understood the concept of pace – but he always got the work done, mostly in spite of me. To this day a ewe has never stood him. Skye approaches and the most stubborn sheep turns and trots off, as if to say “Sorry, Sir, I really didn’t mean it. I’ll do anything you say.” He still turned a ewe two days ago – and I still had a hard time calling him off his sheep. Now he has gone to join his best friend Red, and the two of them will happily gather all the sheep in Heaven.

Sprocket · Blitzen's Sprocket to Me

Sprocket is a Buddy/Tory son. Born in March of 2002. Sprocket is an exceptional Border Collie winning numerous awards and titles by 3 years old. He is super high drive but very calm and collected at home. He loves to work. His hobbies are working. His passion is working. Sprocket is currently showing in AKC and UKC obedience, Flyball and Agility. Sprocket's fastest flyball time is recorded at 3.84 and has been known to run a 75 second agility course in 26 seconds. Sprocket completed his UKC OCH (Obedience Champion) in October of 2005 at 3 years old. He is currently working toward his AKC OTCH. List of titles: UDX, U-OCH, U-AGII, ONYX, TF-3 (U-Fli Top Flight 3).

Other accomplishments: Dog World Winner 2004 Invitations to the UKC All Star Obedience Premier 2004 & 2005 Sprocket shares a home in Wisconsin with 4 German Shepherds and goes to work with Mom everyday and trial most weekends. 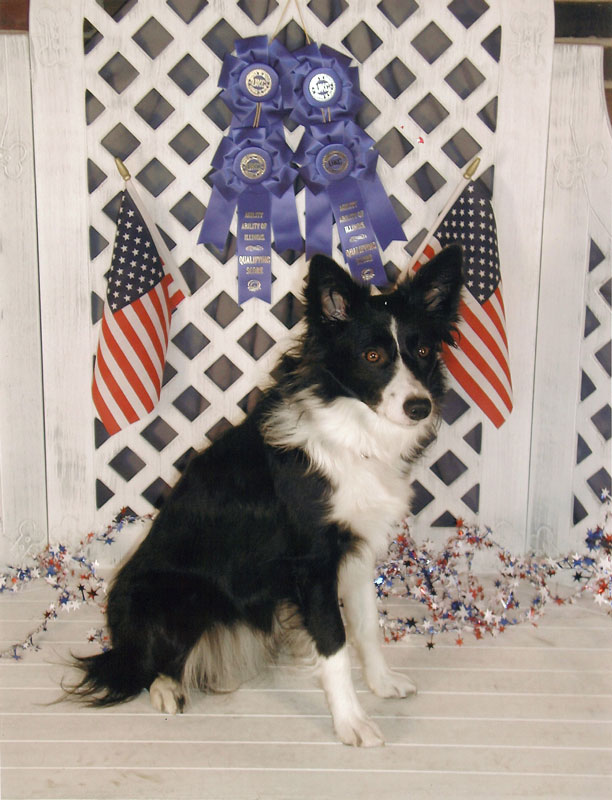 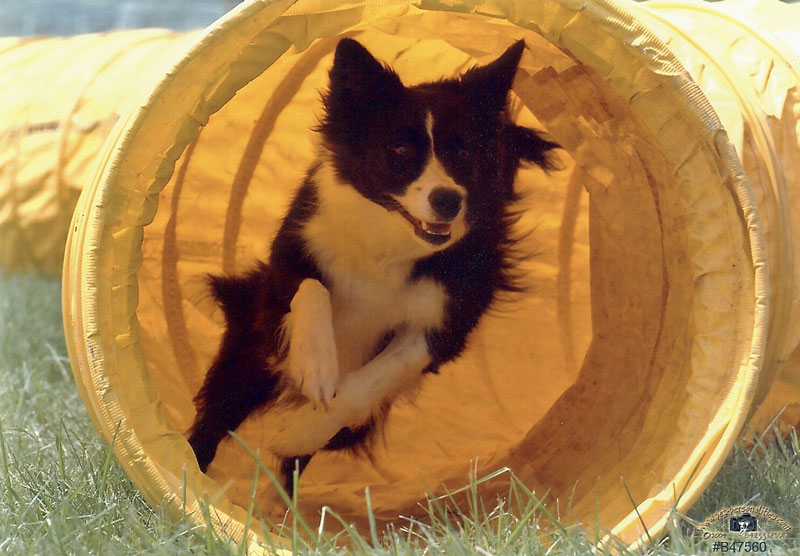 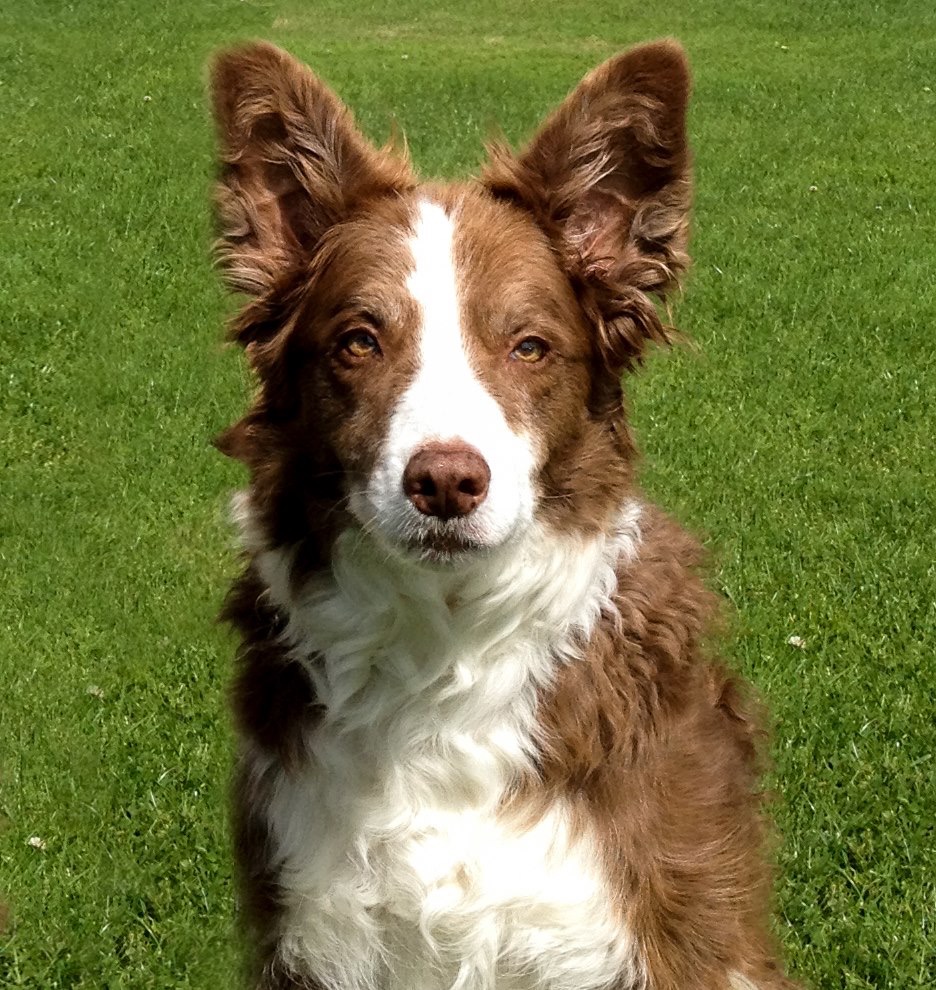 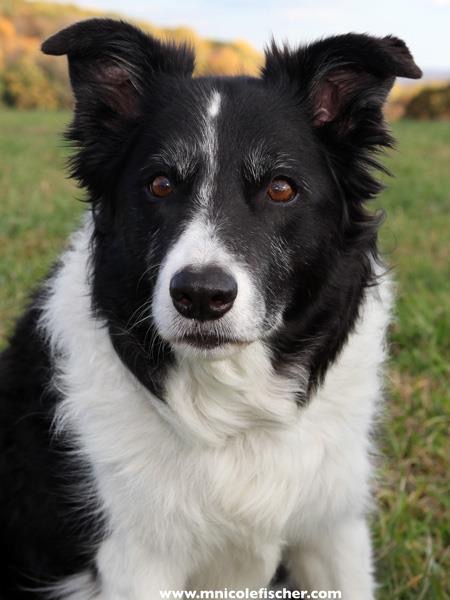 He just needs one Masters Standard Q to get his MAD. For his ADCH, all he needs is 3 Masters Std Q's and 4 Masters Jumpers Q's.

He is already qualified in Steeplechase and DAM team for the 2006 USDAA Nationals, and just needs one GP qualifier to be qualified in that, too. 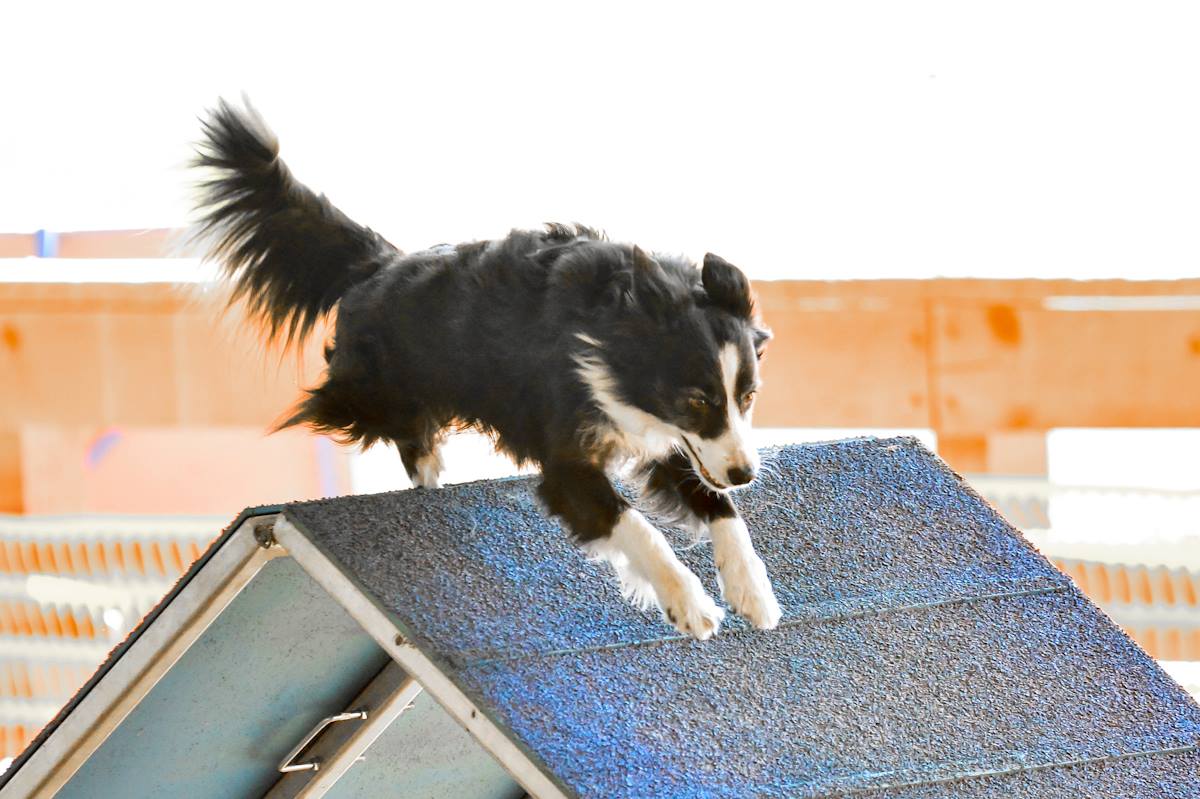