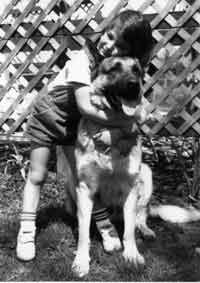 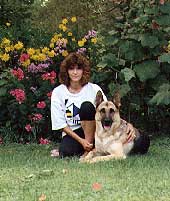 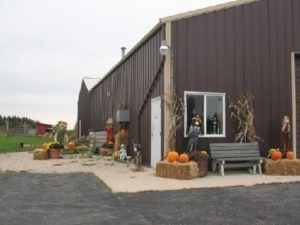 In 1999, Blitzen Canine Academy lost it’s Patriarch on the 4th of July. I lost one of my best friends because Blitz was such an exceptional dog.  In honor of him, I want to share with all current and future “Blitzen” members and clients, how and why Blitzen Canine Academy and Blitzen Agility Club of Chicago were named.

Blitz was imported from Germany in 1989 to be trained and used as a working Police Dog. At this time, I was working as a full  time trainer for Patrol Narcotic Dogs. Moments after his arrival from Germany, I noticed he was a very, very ill dog.  He had frost bite all over his legs and stomach, was riddled with teeth marks from being in a dog fight and almost all of his fur was missing on his legs, stomach and neck.  My heart ached when I looked at him.   I came into work for two months on my days off to soak is infected legs.  After many trips to many specialists, it was found that he also had an autoimmune disease and could not be trained for Police Work.  Blitz would be sent back to Germany to be shot.

During the two months that Blitz was in my care, needless to say, we grew very attached, even to the point of him breaking out of the police-training kennel, dodging 3 kennel workers in the process, to find me several acres away in a training building.

The irony of the whole story is…. My very first German Shepherd’s name was Stormy.  My Second was Thunder.  Blitz was imported with the name Blitz.  I did not give him that name.  Blitz in German means “LIGHTNING”.  When I found out what his name meant, I knew he was here to stay.

Knowing Blitz would never be able to serve as a suitable sire because of all of his health problems - he was neutered.  Being the special dog that he was, his legacy became that every puppy born of my future dog lines and even my own business would proudly carry his name “BLITZEN”.

Blitzen Canine Academy was founded by Pam Juliano, a Certified Trainer for Patrol Narcotic Dogs, who has been competitively training and showing dogs since 1972. Owner/handler of dogs who has received numerous titles in agility, obedience, tracking and Rally-O; including several high in trials and dog world awards. Pam is a licensed judge for AKC, UKC, and CPE agility trials.